Rehad Desai, director of International Emmy award winning film, Miners Shot Down, will release follow up film, The Giant is Falling, at the end of this month at the Johannesburg Film Festival. The film is co-directed by first time director, Jabulani Mzozo.

Desai made the decision to have the international premiere of the film at the first edition of the Johannesburg Film Festival, where the film has been selected for competition.

“It feels so right that we are opening the film in South Africa. This is a film about our present reality. The film raises questions about whether the big events we’ve seen in the last few years, including the brutality we saw at Marikana and the high octane battles over tertiary education, are an inevitable outcome of the inequality we inherited.”

Media are cordially invited to attend the World Premiere, at 8pm on the 29th October at the Alexander Theatre in Braamfontein.

This will be the first of four screenings at the festival.

“Given the nature of this film, we do not expect to get a local broadcast anytime soon, so catch it while you can.”

The European Premiere will take place at International Documentary Festival Amsterdam in November, the largest and most prestigious documentary film festival in the world.

Shot over two years, and supported by a number of international broadcasters, The Giant is Falling provides an inside look at the big political events of recent years that seemingly signify the dying days of the ANC in South Africa. Locating the moment when things fell apart as the Marikana Massacre, the film charts the various ways people have collectively responded to the ANC’s failure to deliver on its promises. From the end of the ANC’s special relationship with the trade unions, to the #FeesMustFall student movement, to the more recent and crushing electoral losses at the polls for the party of liberation, the thread is the festering sore of inequality that is making the current status quo untenable.

The Giant Is Falling

The screening will take place at the Alexandra Theatre Braamfontein

For media inquiries regarding the Johannesburg Film Festival: percy@joburgfilmfestival.co.za

A Civil Society Call to Action

President Zuma has become a liability to our beloved country.  He has become a President of Impunity. The rot spreads from the top down. Without his removal as a first step we cannot start to reach and rebuild the country of our dreams.

Let us remind you. Under President Jacob Zuma:

We have become a country in permanent political crisis. It is most likely that we will witness the reinstatement of charges or corruption against President Zuma; then ‘junk status’; then rising inflation; rising petrol prices; rising food prices, rising hunger, rising despair. If we don’t come together as citizens to address this crisis, our country is going to explode. We demand that Jacob Zuma resign as President of South Africa without delay.

People of South Africa, let us mobilise and stand up for the country we want.

The country we want is a country where government is open and accountable to the people. The country we want is a county that does not tolerate any corruption; that puts quality basic education for our children at the top of national priorities; that will prioritise free quality tertiary education for those that qualify but cannot afford it; that sees unemployment as a painful and degrading national crisis, that is sympathetic with the hunger that gnaws in millions of bellies.

Another South Africa is definitely possible

We come from diverse backgrounds. We have put aside ideologies, religious differences, class differences to advance what we have in common. In short, we are a strong voice for justice and social well-being.

Today we are calling on all South Africans to make their voices heard. Today we announce a rolling plan of mobilization, conversation and action to put the people back at the centre of our politics and economy.

On Saturday, 16th April 2016, we call on people to hold organised discussions in villages, townships, churches, mosques, informal settlements, sports clubs and cultural associations about how we can secure the resignation of President Zuma. We call on you to discuss what is wrong with the country and, more importantly, what is needed to put it right.

On Saturday 16 April we will organise a national consultation at the Regina Mundi church in Soweto to hear the voices of ordinary people and people’s organisations. We call on you to drop any other plan you have and join that dialogue.

Freedom Day April 27 is around the corner. We call on everyone to make this a day of action. This year we must use Freedom Day to reclaim a freedom that has been stolen by Zuma and all who are like him.

This campaign for Jacob Zuma to do the right thing and step down will not stop until the head of the rot is removed. And when we succeed we shall remain vigilant. We do not seek one thief to be replaced with another thief. 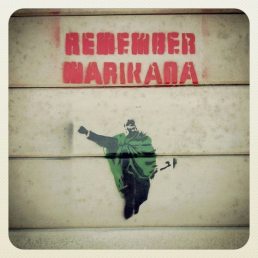 We welcome all those that have participated in solidarity activities in the greater Durban Area over the past three years to join us.

Supporters of the victims of the Marikana massacre will assemble on Friday 29 January, to show their anger at the long delays in the compensation process.

The lawyers representing those injured and arrested in Marikana in August 2012, and the families of the slain miners, will be meeting attorneys appointed by the state for the first time on Friday 29th January to begin talks about compensation.

The Marikana Commission of Inquiry evidence leaders concluded in their heads of arguments that compensation for the victims could circumvent very lengthy and painful civil claims cases. Despite this, Judge Farlam omitted any recommendations in this regard in his final report.

On 29 September 2015, President Jacob Zuma announced to the press that he supports “swift compensation for bona fide claims” against government arising from the 2012 Marikana shootings.

While we welcome the fact that the meeting is taking place, we hope that the promise to expedite the process is genuine and that we will not see further delays in this process which we believe can, and should in the interests of justice, be swiftly concluded.

We also note that 17 mineworkers face serious charges, and will be facing a pre-trial hearing in April. This process is going ahead, while at the same time there has been slow movement on the recommendations arising from the Farlam Commission to appoint a senior counsel to lead a team to investigate100 police officers to see whether they have committed crimes themselves.

We also note that summonses have been served on a number of people by the legal teams representing the victims. We urge the NPA to act independently and swiftly to ensure that all remain equal before the law.

We are extremely proud to announce that the feature length version Miners Shot Down is finally being screened to the wider South African community through a local Free To Air (FTA) TV station. A film that has garnered scores of international awards including of late an International Emmy Award and numerous local TV and journalism awards.

We note the tireless campaigning for this to happen by Amandla.Mobi who gathered over 5 000 signatures and other bodies such as the Right To Know Campaign. The widows of the slain miners also played their part in this effort, turning up to both ETV and SABC in numbers to request an audience and demand the film be screened.

The awards and more importantly this screening are a small but important victory for the victims of the massacre, which include the hundreds of injured and arrested. The nation will at long last get an opportunity to view the massacre from the viewpoint of the victims. This is also a victory for freedom of expression and press freedom that we have seen being eroded over the past years particularly on FTA TV channels

The screening, while late, is also timely as by the end of  this January discussions will be underway with the government in regards to just levels of compensation.

In the following months 17 miners who still face serious charges will be involved in a pre-trail court hearing. In addition, charges brought against individuals at Lonmin and government, including Cyril Ramaphosa, will be going to court. The Marikana Support Campaign will stand side by side with the victims throughout these processes.

We are pleased to announce that South African documentary, Miners Shot Down, has been nominated for an International Emmy® Award.

The film tells the story of the 2012 Marikana massacre. To date, Miners Shot Down has been shown in 76 festivals across 37 countries and won 19 awards.

“We are continuously humbled by the way the film is being appreciated by audiences all over the world. It shows how deeply disturbed people are about what happened at Marikana on 16 August 2012. It is now three years on and the commission of inquiry came to close a year ago. We await a fair and just outcome for the victims.” (Rehad Desai, Director).

The injured and arrested, along with the families of those killed at Marikana, recently learned that President Jacob Zuma plans to appoint a judge assisted by legal experts to expedite the process of civil claims. While this is welcomed, those affected by the massacre are very clear that is not enough. They want criminal prosecution of all those responsible for the massacre.

As we gear up to mark the 3rd anniversary of the Marikana massacre several organisations and allies have been working tirelessly to continue the fight for justice for those affected by the Massacre. The families of the slain Marikana Miners, with support from The Socio-Economic Rights Institute of South Africa (SERI) , the Legal Resources Center (LRC) and the WITS Law Clinic have filed civil claims against the Government.

The Marikana Support Campaign has also released a press statement requesting that the State takes a morally correct stance on the Marikana victims compensation claims.

David Bruce for the Council for the Advancement of the South African Constitution (CASAC) has provided a summary and discussion of the report of the Marikana Commission. The report is essential reading for those who want to understand where the report failed to properly address the events of 9-16 August and how its ‘key framing argument’ needs to be reviewed.

Download:  Summary and discussion of the report of the Marikana Commission – David Bruce.pdf

Please remember to check our blog regularly for updates and follow us on Facebook for more information.